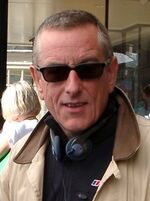 David Richards (born 1948 in Hollinwood, Oldham) worked as a director on 57 episodes of Coronation Street from February 1990 to July 1993.

He trained as a painter but started making films while at art school. His early career was at Granada Television on factual programmes and moved into drama after fifteen years.

His other credits include The Practice, Emmerdale, September Song, The Bill, Reckless, Grafters, Messiah 2: Vengeance Is Mine, Wild at Heart, Foyle's War, The Runaway, Vera, DCI Banks and Silent Witness.

In 2000 he won the Best Director award at the New York Film and TV Festival for This Is Personal: The Hunt for the Yorkshire Ripper.

Retrieved from "https://coronationstreet.fandom.com/wiki/David_Richards?oldid=271640"
*Disclosure: Some of the links above are affiliate links, meaning, at no additional cost to you, Fandom will earn a commission if you click through and make a purchase. Community content is available under CC-BY-SA unless otherwise noted.