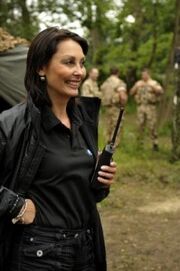 Dani Biernat was been a Stunt Double on Coronation Street in May 2016 returning to the programme as a Stunt Coordinator in January 2018. To date, she has been involved in stunt work on 17 episodes of the programme.

As an actress she has had speaking parts in Los Dos Bros, Messiah 2: Vengeance Is Mine, State of Mind and Humans.

Episodes with stunts by Dani BiernatEdit

Retrieved from "https://coronationstreet.fandom.com/wiki/Dani_Biernat?oldid=366546"
*Disclosure: Some of the links above are affiliate links, meaning, at no additional cost to you, Fandom will earn a commission if you click through and make a purchase. Community content is available under CC-BY-SA unless otherwise noted.