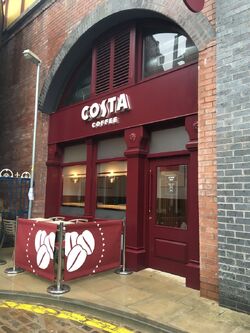 Costa Coffee is a British coffeehouse company. One of their shops is situated in Victoria Street, underneath the platform of Weatherfield North Tram Station.

In October 2018, Carla Connor spied on Victoria Gardens from outside Costa Coffee in order to catch Johnny Connor's blackmailer in the act of collecting the £50,000 payment for their silence over his fling with Liz McDonald.

Note: The shop was a part of the Victoria Street extension which was built between 2017 and 2018 at the MediaCity studios. One of two product placement premises on the set, the other being the Weatherfield Co-op, it made its on-screen debut in Episode 9441 (27th April 2018).

Retrieved from "https://coronationstreet.fandom.com/wiki/Costa_Coffee?oldid=360953"
*Disclosure: Some of the links above are affiliate links, meaning, at no additional cost to you, Fandom will earn a commission if you click through and make a purchase. Community content is available under CC-BY-SA unless otherwise noted.