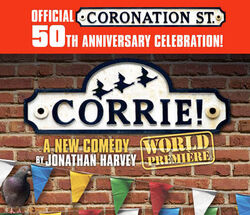 Corrie! was a stage play written by Jonathan Harvey and which premiered at the Lowry, Salford on 12th August 2010. It aimed to tell the first fifty years of the programme on stage in as comic and nostalgic a way as possible. It was the first stage version of the programme ever to be presented (see Coronation Street on the Road).

The play was a collative idea between stage promoter Phil McIntyre and Coronation Street's executive producer Kieran Roberts. They approached the-then current writing team for someone to script the piece, suggesting that it be run along the lines of The Reduced Shakespeare Company in that a mass of text be condensed into a couple of hours and with a small cast playing many different parts.

Harvey said in an interview prior to the premiere:

“I expressed an interest because I thought it could be a bit of a laugh. Now I’d have to say it’s been bizarre but enjoyable. Luckily, we’ve got a really good archive department and I insisted on a researcher to help me, which has been invaluable! First of all, I tried to make a list of all the really good characters but that was just too massive. Then I went through all the top story lines from each year so I could get a sense of the important characters. From that, I decided you could build it around Ken, Deirdre and Gail and then started to add in all the comic or iconic characters that you just couldn’t leave out. Even so, there was lots of stuff I wanted to get in that you simply couldn’t fit in a two-hour show. I did try to do all the dialogue verbatim, but when I actually looked at the scripts, as opposed to relying on my memory, that obviously wasn’t always going to work. The conversation with Gail where Richard Hillman is revealed as a serial killer took place over three episodes, for instance, so you obviously have to condense things like that.”

The resulting production of just under two-and-a-half hours featured five cast members with the scenes linked by an on-stage narration provided by Charles Lawson (Jim McDonald). Altogether fifty-five characters were represented on stage in the two hour production. The cast and some of the characters they represented were:

The play was directed by Fiona Buffini and designed by Liz Ashcroft.

The reviews for the production were uniformly positive.

Ben East in The Stage said, "Corrie! has the feel of a sketch show-cum-pantomime, with many of the best scenes and lines from down the years gleefully re-enacted" but did admit that the play, "completely relies on its audience knowing and loving Coronation Street. One for the fans, then - but with almost ten million tuning in to every episode, it’s hardly niche entertainment."

Charles Spencer in The Daily Telegraph said that it was, " often blissfully funny" observing, "the audience are in some ways the stars of the show, audibly commenting on what’s happening on stage as they might while watching it at home on TV and taking flash photographs of the action until told to desist by the amiable narrator, Charles Lawson." They went on to state, "What’s fascinating – and admirable – about the show is that ITV has allowed Harvey mercilessly to take the mickey out of Corrie’s melodramatic absurdities and to rejoice in the programme’s very English brand of camp humour." and concluded that, "this show is absolutely bursting with heart and humour."

Libby Purves in The Times said, "There is, for us old aficionados, the element of knowingness - as the chronology zips lightly to and fro, we see the coming pratfall and cheer when the killer tram or seductive canal barge slides on stage. There is also the bald fact that if you telescope any soap plots, however serious at the time, they become hilarious. Lines like 'We lived on an ordinary Northern Street – she was held hostage by a rapist while I was rehearsing The Country Wife at the Technical College...' meld straight into electruction-by-hairdryer."

Chris Riches in the Daily Express summed up with, "The writing is endearing and funny but it is the performances and the brilliant way they capture the 'special street' that has the audience rolling down the cobbles in laughter."

The original run was planned to end on 21st August but good box office receipts meant that it was extended to 28th August.

The confirmed success of this initial set of performances led to a national run in the UK and Ireland in 2011 on the following dates and venues:

Throughout the tour, the role of Narrator was played alternately by Roy Barraclough, Ken Morley and Gaynor Faye. Sherrie Hewson appeared during the play's run in Manchester.