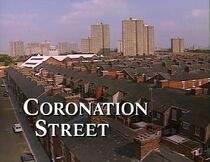 In its second year under executive producer Jane Macnaught, Coronation Street continued to revolve around blockbuster storylines. As Sarah Platt's teenage pregnancy storyline had been popular, writers created more issue-led plots, including the assault and rape of Toyah Battersby, Alma Halliwell's death by cervical cancer, the abuse of Wayne Hayes by his stepfather Alex Swinton and Sarah Platt being groomed by a pervert on an internet chatroom. Compared with the earlier storyline, reactions to these plots were mixed and none were notably successful in the ratings.

Toyah's rape by an unseen assailant was played as a whodunit, with Toyah's friend Phil Simmonds later being unveiled as the culprit. Though the performance of Georgia Taylor was praised, the decision to frame the storyline around a "whodunit"-style mystery was lambasted, with The Mirror and the Daily Record accusing the programme of trivialising the impact of the rape itself. Due to the storyline airing immediately after EastEnders's popular "Who shot Phil Mitchell?" plot, the storyline was interpreted by critics as an attempt by Coronation Street to hit back with a mystery of its own.

Alma was killed off in June after Amanda Barrie quit the programme, 20 years after her first appearance. The cervical cancer storyline proceeded at a rapid pace, with Alma discovering that she had the terminal illness and passing away six weeks later, the late diagnosis occurring due to the hospital mixing up her smear test results. Despite the on-screen explanation, Barrie disliked the storyline, referring to it as a "cheap ratings ploy" for giving the impression that cancer sufferers had just weeks to live after being diagnosed, although she conceded that the storyline had had the positive effect of encouraging more women to have smear tests.

In March, three months after its 40th anniversary, Coronation Street broadcast its 5000th episode. The hour-long instalment centred on a custody hearing at which Mike Baldwin beat Ken Barlow in obtaining guardianship of Adam Barlow, Mike's son and Ken's grandson. Susan Barlow made her first appearance since 1987 in January (recast with Joanna Foster) for the storyline which saw Mike discover that he had a 12-year-old son and that Susan had lied about having an abortion when they split. So that the fight would be between Ken and Mike, writers killed off Susan in a car crash. Iain De Caestecker played Adam on a recurring basis between 2001 and 2003.

The empty No.11 was rented out by Steve McDonald to Eileen Grimshaw and her teenage sons Jason and Todd, with Bruno Langley joining the cast as bookish mummy's boy Todd. Daran Little planned Todd as Coronation Street's first gay character, based partially on himself, although his coming out story was held back until 2004. Little - previously the programme's archivist - joined the writing team at the beginning of the year. His successor as archivist was Helen Nugent.

The Rovers changed hands for the fourth time in as many years as Mike and Fred Elliott sold their shares to Hamilton Griffiths Holdings, only to discover that their partner Duggie Ferguson owned it. Duggie himself auctioned off the Rovers at the end of the year, and it was bought by Fred for his wife Eve to run as landlady. Melanie Kilburn returned as Eve, who married Fred in September.

Aside from Amanda Barrie, Jacqueline Chadwick was the main departee. Chadwick had been due to go on maternity leave, but complications in her pregnancy forced her to leave a few days early. As her exit scenes were yet to be filmed, Chadwick was asked to work on, but the actress refused and so Linda Baldwin's planned last appearance was rewritten so that she was only seen from afar and could be played by an extra. Chadwick did not return after her maternity leave.

Richard Standing made his final appearance as Danny Hargreaves, who walked out on Sally Webster after she confessed, on their wedding day, that she had slept with Kevin a year earlier. John Quayle left the role of Anthony Stephens after one year, with Anthony going to New Zealand on his own after Rita Sullivan turned down his proposal of marriage. Doom-monger Edna Miller died in Duggie Ferguson's bed but, in one of the more unusual instances of an actor playing different characters, actress Joan Kempson re-appeared in the programme as Edna's equally gloomy sister Iris Merry at Edna's funeral.

Julie Hesmondhalgh was absent between September and December as the actress went on maternity leave.

Following a 12% slump in ad revenues, ITV became more dependent on its proven successes. It had already increased Emmerdale's weekly output from three to five episodes the previous year, and mounted a revival of Crossroads in May, which also ran at five episodes per week. In the Spring, the network ordered additional Coronation Street to bring it into line with the other soaps on the channel.

Unlike the introduction of the Friday and Sunday episodes in 1989 and 1996, the existing shooting schedule remained in place, with the only change being an increase in workload. To enable a smooth transition to producing five episodes a week, output was increased gradually over the course of two years, at the end of which the new episode was fixed at 8.30pm (the half-hour gap designed to avoid a clash with that evening's episode of EastEnders). Prior to that, many weeks still contained only four episodes, and many had extended episodes (notably, the aftermath of Toyah's rape was shown in a 70-minute slot, making it the longest episode of the programme to this date). The second half of 2001 featured a run of episodes, broadcast on Thursdays, which were advertised as specials. Many of these featured smaller casts and focused on a single storyline, or were shot totally on location to avoid taking studio time from other episodes. These included a Derbyshire camping holiday with the Platts, Websters and Croppers, Fred and Eve's wedding at which Linda Baldwin went missing, and Mike confronting Alma about her illness in the Lake District.

In October, after being in charge of Coronation Street for two years, Jane Macnaught was appointed New Dramas producer at Granada, to work under Carolyn Reynolds, leaving Coronation Street without a producer. Reynolds became its executive producer again and took on the day-to-day running of the programme until its new producer, former Emmerdale boss Kieran Roberts, took up the post in December. Despite leaving her position immediately, Macnaught remained credited as executive producer until March 2002.

At the end of the year, BARB stopped its practice of recording only aggregated figures for programmes which were repeated in the same week as their initial showing, and so this is the last year where ratings which exclude omnibus repeats are not available.

For the second year in a row, Coronation Street lost over a million viewers compared with the one before. The average was 13.25 million viewers, a 9% fall from 2000's figure. As in that year, every month was down on year-on-year, with the magnitude of the drops fluctuating from month to month from as low as 300,000 viewers in April to 2.5 million viewers in February.

After maintaining a huge presence atop the viewing charts since 1989, Coronation Street saw just three episodes reach number one, the lowest since the late 1980s (when EastEnders had an advantage over Coronation Street due to launching with an omnibus; prior to that, the latest year to have less than ten episodes at number one was 1978).

Episode 5090 on 10th August was shown opposite EastEnders, the first time that regular 30-minute length episodes of the programmes had clashed. The head-to-head occurred when the BBC chose to launch their soap's fourth weekly episode on that date at 8.00pm, where Coronation Street had been previously scheduled due to an hour-long Emmerdale being shown at 7.00pm. Under normal circumstances, due to the large number of people who watched both programmes ITV and the BBC never scheduled them against each other. EastEnders gained 13.98 million viewers against Coronation Street's 8.55 million viewers.