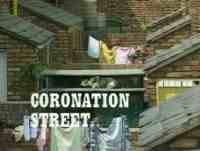 After starting in late 1998, David Hanson remained in charge of Coronation Street for most of the year, with Carolyn Reynolds continuing as executive producer. Former production assistant Jane Macnaught became the programme's producer with Episode 4704, while Reynolds left after Episode 4691 and was not replaced.

Since his 1997 heart attack, Bryan Mosley had been appearing as Alf Roberts in a reduced capacity but, despite further problems including a dramatic weight loss, he had refused to call it a day. Out of concern for the actor, Hanson instructed writers to kill off Alf. Mosley's character passed away peacefully - and unnoticed - while slumped in a chair at Nick Tilsley's 18th birthday party in the New Year's Day episode. Mosley then died on 9th February, six weeks after his character's on-screen death.

Hanson inherited Brian Park's plans to introduce Coronation Street's first Asian family. These were Indian divorcee Ravi Desai, his daughter Nita and teenage son Vikram, who appeared over January and February. Writers were careful to avoid ethnic stereotypes but the show was accused of re-enforcing them by placing the family in the Corner Shop - a move which was defended by Rebecca Sarker (Nita) who commented that it was a fact of life that there were a lot of Asian shopkeepers in Britain. The Desais were meant as a long-term addition to the programme, but after seven months actor Saeed Jaffrey was dismissed from the role of Ravi by Jane Macnaught. Jaffrey's axing came two days before the actor spent the night in a cell for being drunk and disorderly on a train. Ravi was subsequently written out off-screen, returning to India after his brother Raj's sudden death.

In November, Jimmi Harkishin first appeared as Nita and Vikram's cousin Dev Alahan, who a month later bought Ravi's chain of corner shops. Instead of being a family-run business, the Corner Shop was run by Dev as a solitary character.

The departures of Mosley, Beverley Callard, Philip Middlemiss and Roy Barraclough left room for more new cast members. Tracie Bennett was brought back as Rita Sullivan's former foster daughter Sharon Gaskell and was involved in one of the biggest storylines of the year, as Sharon learned about her fiancé Ian Bentley's fling with Natalie Barnes and dumped him at the altar. Writers put Sharon at the forefront of the show by having Rita give her the Kabin, only to pull the plug on the character after ten months and have her marry Ian after all and leave Weatherfield. Sharon's place at Rita's side was taken by Norris Cole, Derek Wilton's former nemesis who was brought back on a full-time basis. Pompous, nosy and prattling, Emily Bishop's eventual lodger in some respects served as a replacement for both Mavis Wilton and Percy Sugden.

Meg Johnson also returned as Eunice Gee, making her first appearance since 1982 for a short storyline showing Jack and Vera Duckworth become residents and eventual managers of the Park Road B&B. The Duckworths were joined by lodger Tyrone Dobbs, who was retained after mother Jackie was written out in March. Jackie's exit storyline tied into Curly Watts's return, with Curly enlisting help from the neighbours to remove the squatting Dobbs from No.7.

Maggie Jones reprised Blanche Hunt full-time for the first time since 1976. Blanche played a key role in bringing Ken and Deirdre back together after ten years, in a storyline which saw Dawn Acton play Tracy for the last time prior to the re-cast of the character in 2002. Ken and Deirdre's reconciliation occurred as two marriages ended; Mike and Alma Baldwin divorced after Mike's fling with Julia Stone, while Martin Platt embarked on an affair with fellow nurse Rebecca Hopkins in a storyline which continued into 2000. Mike's life went in a new direction, with Mike getting engaged to one of his machinists, Linda Sykes, and his son Mark Redman, now 18, joining as a full-time character played by Paul Fox. Meanwhile, the focus of the Platts' storylines also shifted; with Adam Rickitt quitting his role of Nick Tilsley to pursue a pop career, and Nick moving to Canada after forcing Leanne to abort their baby, Gail's younger children became more prominent. In October, Tina O'Brien replaced Lynsay King as Sarah Louise, who was given a best friend in the form of Candice Stowe, played by Nikki Sanderson.

Departures included Elizabeth Bradley as Maud Grimes, Holly Newman as barmaid Lorraine Brownlow, and Stephen Billington as Greg Kelly. Greg departed on New Year's Day but returned for six episodes in May. The storyline climaxed with an episode focused entirely on Greg taking Rosie and Sophie hostage in No.13 in order to use Sally as a pawn in his battle against Mike. Meanwhile, Gaynor Faye decided to leave after four years as Judy Mallett. As the character had only recently given birth to twins, Judy was killed off, suffering an embolism caused by a car crash.

Following the closure of the Granada Studios Tour, Coronation Street's set was extended to include part of Victoria Street. The new development was comprised of four new shop units, two houses, six flats and a builders' yard. Most of the building work took place later in the year but a frontage for Roy's Rolls's new premises was built months earlier so that cafe could be transferred there, removing the need for location filming whenever the cafe exterior was seen at its present Rosamund Street location.

With the arrival of Jane Macnaught as producer, a minor change was made to the title sequence: the programme logo was moved to the start of the sequence, and writer and director credits added.

In August, ITV announced a six-part late evening spin-off of Coronation Street set in Brighton and Calais, featuring the returns of several ex-cast members. The series was transmitted over six consecutive evenings in November, and starred Julie Goodyear, Ken Morley and Chloe Newsome as Bet Gilroy, Reg Holdsworth and Vicky McDonald, together with Simon Gregson and Chris Bisson as Steve McDonald and Vikram Desai who journeyed down to Brighton from Weatherfield.

Unlike its parent programme, Coronation Street - After Hours was shot by a single video camera, not unlike film work. There was some speculation that a late-night slot would lead to a more "adult" presentation than the usual "family" fare of the main programme but in the event it stayed firmly within the boundaries expected by its viewer base.

Ratings slipped from their 1998 high to an average of 15.57 million viewers (aggregated), representing a drop of almost 200,000 viewers on the previous year's figure. January to March, along with May, June and August were up on the same months in 1998, while the other six months experienced falls. October to December saw the biggest drops, each of over 1.5 million viewers.

The number of episodes at number one also fell, with 25 episodes reaching the top spot - the lowest figure since 1991.

Episode 4572 (7th March 1999) was the highest-rated episode of the year, gaining an audience of 19.84 million viewers. The episode saw Sharon Gaskell jilt Ian Bentley for his affair with Natalie Barnes.