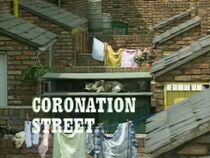 Brian Park announced that he was stepping down as producer in April, feeling that he'd accomplished what he set out to do. After completing his contract, Park set up his own production company, Shed Productions. His replacement was David Hanson, who received his first credit in Episode 4520 on 6th December. Coronation Street's former executive producer Carolyn Reynolds returned to her old role at the same time.

Park's resignation occurred when the programme was resolving its notorious "Deirdre in prison" storyline. After falling for supposed airline pilot Jon Lindsay, Deirdre Rachid had been embroiled in his web of lies, and ended up being sentenced to 18 months in prison after being found guilty of his crimes despite being completely innocent. The storyline was very well received and generated a lot of press attention, with The Sun and The Guardian entering into the spirit of the occasion by calling for Deirdre's release, dubbing the campaign "Free the Weatherfield One". Deirdre was pardoned after three weeks when another victim of Jon's came forward. Her cellmate in prison was Jackie Dobbs, played by Margi Clarke who reprised her character full-time in November. Jackie was accompanied in her second stint by her oafish but kind-hearted son Tyrone, with Alan Halsall playing Tyrone.

The most noteworthy character created this year - and Park's proudest achievement on the programme - was Hayley Patterson, a new Firman's Freezers recruit who, upon starting a romance with Roy Cropper, confessed to him that she was a pre-op trans woman. Before Hayley, Coronation Street had never featured an LGBT character and ITV had started making enquiries about whether they planned to introduce one. Script editor Ann McManus pitched the character as a way to have the programme be seen to be leading the way instead of chasing the other soaps' coattails. Julie Hesmondhalgh and David Neilson filmed scenes in Amsterdam when Hayley went there to complete her transition, with Roy joining her there and the couple returning together to Weatherfield. Despite the initial focus on Hayley's transgenderism and the difficulties she faced in her everyday life, writers were careful to avoid having it define Hayley's character. Her warm personality and friendships with Roy, Alma Baldwin and Curly Watts were established before revealing the truth to the audience, and over time her transgenderism was mentioned less and less, while Roy and Hayley became one of Coronation Street's most enduring and popular couples.

With Underworld now up and running, new machinists were cast, including Linda Sykes played by Jacqueline Pirie and Alison Wakefield played by Naomi Radcliffe, while Helene Palmer as Ida Clough and Deborah McAndrew as Angie Freeman made their last appearances. Angie dissolved her partnership with Mike to work for Jarvis Rousseau Associates in London, while Ida wasn't given a firm departure. Mike's new partner was the hitherto unknown son of Les Battersby, Greg Kelly, who was developed as a villainous character who moved in on Sally Webster due to her receiving a large inheritance after her mother's death. The year also saw the birth of Billy and Becky Mallett on Christmas Day, the return of Lorraine Brownlow as a new Rovers barmaid, and a one-off appearance by Joan Kempson as miserable cleaner Edna Miller, who returned full-time in 2000.

Jack and Vera Duckworth's reign at the Rovers came to an end when Alec Gilroy bought them out, with the condition that they were kept on as staff and remained in residence. This unworkable agreement ended with a Christmas Day stand-off between Alec and the Duckworths, with Alec eventually admitting defeat and selling up to Natalie Barnes. 26 years after his debut as Alec, Roy Barraclough decided to leave, this time making his final exit from the programme. Chloe Newsome made a brief return as Vicky McDonald for the storyline, in which Alec decided to invest in a wine bar in Brighton with his granddaughter.

Natalie's ownership of the Rovers was bittersweet, coming a month after the death of her husband Des Barnes at the hands of drug dealers. After nearly nine years playing Des, Philip Middlemiss decided to leave but, against his wishes, writers chose to kill off Des to make Natalie's story more tragic. Lee Warburton returned briefly as Tony Horrocks, on the run from gangsters who caught up with him at No.6, leading Des to try to intervene only to receive a fatal blow to the head.

Meanwhile, Chris Collins departed when Matthew Marsden quit after a year to attempt a pop music career, Tina Hobley quit after two years as Samantha Failsworth, and Joanne Froggatt left after 19 months as Zoe Tattersall, departing with a memorable storyline in which Zoe joined a religious cult, the Etheric Foundation, after the death of her daughter Shannon from meningitis. Fiona Middleton left after six years - taking her son Morgan with her - and Liz McDonald after nine years, although Beverley Callard would make several returns to the part starting in 2000.

Two major storylines were affected by the unavailability of Kevin Kennedy as Curly Watts. In the first instance, Kennedy had emergency surgery after picking up a bug on holiday, causing Curly to be hurriedly excised from Samantha Failsworth's exit storyline. Three months later, Kennedy checked into a clinic to be treated for his alcoholism. Curly was written out of a revenge storyline in which Anne Malone returned to ruin Curly, causing him to be wrongly arrested for blackmail. Her plans backfired when a security guard accidentally locked her inside a walk-in freezer when she was putting WD-40 on the fish fingers at Freshco, resulting in her being frozen to death. Kennedy left the clinic after a month having beaten the bottle but Curly spent the rest of the year off-screen, having skipped bail and gone travelling.

For the first time in six years, Coronation Street increased its yearly average. At 15.76 million viewers, this put 1998 slightly ahead of 1996 and well ahead of 1997. This was also only the fourth time - and the first since the 1960s - that every month increased its audience from the same month the year before. The biggest increases were in March and December, each of a million and a half viewers. The former month featured Deirdre and Jon Lindsay's trial for fraud.

Des Barnes's death was the biggest audience-puller of the year, drawing 20.3 million viewers. This was the highest peak since 1993. As in 1997, 43 episodes reached number one in the ratings, and none fell outside the top twenty.

ITV2 started transmission on 7th December and consequently Episode 4521 (7th December 1998) was the first edition of the programme to be repeated on that channel later on the night of its first showing.