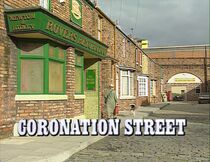 Carolyn Reynolds was producer for a second year, after which she took up the position of executive producer which she held for most of the next twelve years.

The Corner Shop received a facelift courtesy of new owner Brendan Scott, former Bettabuy manager, who beat Reg Holdsworth to the punch. Scott's transformation of the shop into an old-fashioned grocery included restoring the counter to its former position, facing the door, and introducing a darker colour scheme. Other changes - such as serving customers in a boater and dressing assistant Deirdre Barlow in a mop cap and frilly apron - were temporary. After Scott died of a heart attack in the shop, it spent a brief period again under Alf Roberts's ownership before it was sold to Reg.

The programme's first mixed race marriage was planned between the characters of Andy McDonald and Amy Nelson, a newcomer played by Louise Duprey. Andy and Amy's relationship was developed over six months, with Andy giving up university so that he, Amy and her son Dominic could be a family, causing a rift between Andy, Jim and Liz. Shortly after the recording of Episode 3601, Duprey had a nervous breakdown, having struggled with the pressures of fame. The wedding plans were shelved and the character was only seen once more, in Episode 3609 in which she was played by Melanie Brown. The programme's first mixed race marriage took place the following year, between Deirdre and Samir Rachid.

Caroline Milmoe left the cast when her character Lisa Duckworth was killed off in a road accident. As there was no Christmas Day episode this year (for the only time since 1987), the storyline climaxed the evening before, in which Jack Duckworth disowned Terry after discovering that he had sold his son Tommy to Lisa's parents. Brian Hibbard left after eight months as Doug Murray, while Deborah McAndrew also departed, with her character Angie Freeman leaving for a job in Mexico.

December marked the last appearances of Deirdre Barlow and Phyllis Pearce for five and twelve months respectively, as Anne Kirkbride took time off to be treated for non-Hodgkin's Lymphoma, and Jill Summers for abdominal abscess.

Omnibus figures were down by 1.5 million viewers on 1992. The average for the year was 16.81 million viewers. Note that the number of ITV stations which showed the omnibus varied from month to month; in September, all stations agreed to country-wide repeats of individual episodes on Mondays, Wednesdays and Fridays at 12.55pm, a situation which remained until December when Granada and Ulster reverted to weekend repeats.

Figures for the initial showings of each episode are not available for this year.

The highest-rated episode of the year was Episode 3518 on 22nd March. 51 episodes reached number one - the third time in history (after 1962 and 1965) that fifty or more Coronation Street episodes topped the charts in a single year and last to date. Again, no episodes dropped out of the top twenty.