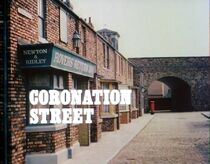 1983 was one of Coronation Street's most tumultuous years to date.

After taking over as producer at the end of 1982, Mervyn Watson's first episodes were broadcast at the beginning of the year, with his predecessor Bill Podmore assuming the role of executive producer. In February, the programme screened one of its biggest storylines in the famous Ken-Deirdre-Mike love triangle. The story arose following months of debate in the writers' room over the direction of William Roache's character. Ken Barlow had recently come under fire from The Times for being "very boring", and Granada bosses had indicated that they would support him being killed off. When Roache asked for more exciting storylines, writers decided that the best way to do so was to give Ken a rival - Mike Baldwin - and show him fighting to save his marriage.

As Deirdre and Mike began their affair in late 1982, producers expected that viewers would side with Ken as the injured party. However, viewers relished the will-she-won't-she aspect of the story, and frenzied tabloid speculation over whether Deirdre would stay with Ken or go with Mike marked the beginning of a more sensationalised style of reporting on the soap by the media. Famously, when Deirdre made her decision to stand by Ken in Episode 2285 on 23rd February, the scoreboard at Old Trafford flashed a message "Ken and Deirdre reunited. Ken 1 - Mike 0" during a Manchester United vs. Arsenal football match.

The marriage of drama and comedy favoured by Podmore was very much carried on by Mervyn Watson, with other humorous setpieces including Bet Lynch and Betty Turpin being stranded in a lake in Fred Gee's Rover 2000, and Jack Duckworth being set up with his own wife through the Bill & Coo Video Dating Agency under the name "Vince St. Clair". Two months after the latter story aired, Jack and Vera moved into Coronation Street, with William Tarmey completing his journey from extra to full-time regular. The house, No.9, was left empty when Chalkie Whitely won on a five-horse accumulator and left Weatherfield to join his son and grandson in Australia.

The Duckworths' Machiavellian teenage son Terry, played by Nigel Pivaro, was introduced as his family became residents. In one of the more successful initiatives by the programme to boost its younger cast, Terry debuted in the same year as nerdy binman Curly Watts and cheerful mechanic Kevin Webster, with Kevin Kennedy and Michael Le Vell joining the cast respectively. Another teen, Shirley Armitage, became a machinist at Baldwin's Casuals. Actress Lisa Lewis was the programme's first black regular cast member.

Meanwhile, Cheryl Murray reprised the role of Suzie Birchall for five months from January to June, and in August insufferable pensioner Percy Sugden took over Ena Sharples's old position of Community Centre caretaker, moving into the Community Centre flat. At the same time, community development officer Ken Barlow was made redundant and left the centre, buying into the Weatherfield Recorder free sheet. The running of the paper would drive many of the Barlows' storylines for the next six years.

Another new location was the Graffiti Club disco bar, which utilized the large warehouse entrance in Rosamund Street built into the new outdoor set. Owned by Mike Baldwin and Alec Yardley, the opening of the club was one of the year's principal storylines but the establishment was barely featured beyond 1983.

Aside from the Deirdre/Mike affair, tabloid headlines concerning Coronation Street were dominated by scandal. Early in the year, Peter Adamson wrote a series of articles for a newspaper crticising the programme and its cast, in serious breach of his contract. The producers were about to suspend the actor without pay for six weeks when news broke that Adamson had been charged with indecently assaulting two eight-year-old girls in a public swimming bath. The suspension set aside, Len Fairclough was written out while Adamson concentrated on his defence, with his character working away in Ashton-under-Lyne. After being acquitted of the charges, Adamson was offered £10,000 by Granada to settle his legal bills, but the actor instead chose to sell his story to a tabloid, contravening Granada's house rules on press interviews. Refusing to back down, Adamson was fired from the programme effective immediately.

To maximise drama, Len's off-screen death in a car crash in December was followed by widow Rita's discovery that he'd been visiting his secret mistress, Marjorie Proctor. Sharon Gaskell and Bill Gregory returned for Len's funeral, with the latter rekindling his romance with Elsie Tanner. This was intended to tie in with Elsie's own departure in January 1984; in another blow to the programme, Patricia Phoenix had resigned after 23 years.

The year also saw the final on-screen appearance of Doris Speed as Annie Walker, the original landlady of the Rovers Return. Speed was recovering from a stomach complaint when the Daily Mirror printed a story that she was, at 84, fifteen years older than she had publicly claimed (although the article was not accompanied by a copy of her birth certificate, as is sometimes claimed). After suffering a relapse, Speed was written out of the programme for the time being. This was shortly followed by a break-in at Speed's home by two young thugs, who ransacked the place while the actress hid upstairs waiting for the police. The event was the final straw for Speed who retired immediately afterwards.

Peter Dudley, who played Bert Tilsley, suffered a stroke while awaiting a re-trial on a charge of importuning, at which he intended to plead not guilty. The stroke caused Dudley to lose the use of his left arm, which was incorporated into storylines with Bert being injured in a gas explosion. He was subsequently written out to stand trial, but suffered two heart attacks and a stroke and died before it could take place. Both Annie and Bert's fates were addressed the following year.

The programme also lost Eddie Yeats when Geoffrey Hughes resigned after nine years. Hughes was disappointed with the decision to have Eddie marry as he viewed the character as a bachelor. Marion Yeats was written out with him as the newlyweds moved to Bury to start a family. Eddie's departure caused problems for the writers as his presence at No.13 meant that ailing actor Bernard Youens, playing Stan, did not have as many lines to learn. In November, a storylines was contrived in which Stan discovered he was three years older than he thought - this was done in order to allow Stan to retire.

The year also marked the beginning of a lengthy absence for Tracy Langton when Christabel Finch's family moved out of Manchester without informing the producers. It was decided not to recast Tracy until some time had passed, as producers felt that viewers would find it jarring.

Despite a high public profile throughout the year, Coronation Street's ratings were only slightly higher than in 1982, the decade's low point. Seven months saw increases over the previous year, with most months seeing only slight climbs or falls. The average figure for the year was 14.64 million viewers, an increase of 137k over 1982. The highest-rated episode of the year was Episode 2285, transmitted on 23rd February, which gained an audience of 18.45 million viewers. The episode concluded the Ken-Deirdre-Mike love triangle with the Barlows deciding to stay together.

The programme's performance in the viewing charts was very strong, with all episodes charting inside the top 20, and 48 episodes reaching number one, a total only surpassed in 1962, 1963 and 1965 and an increase of 12 over 1982.