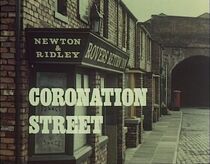 Bill Podmore remained producer for the third year in a row in one of Coronation Street's most drama-filled years up to this point.

Writers were faced with crafting an exit storyline for Ernest Bishop following a dispute with actor Stephen Hancock over the cast contract system. Hancock objected to the fact that senior members of the cast were paid for every episode, and others only for the ones they appeared in, and threatened to resign unless Granada moved to a fairer system. When producers did not oblige him, he carried out his threat. As writers could not think of a believable way to have the Bishops split up, they agreed that Ernest had to die. In January, Ernie became the first major Coronation Street character to be murdered, shot during a bungled wages snatch at Baldwin's Casuals. The storyline, in particular the depiction of Emily's grief, drew wide acclaim, and according to writer John Stevenson elevated the critical standing of Coronation Street as a whole (50 Years of Coronation Street: The (very) Unofficial Story, JR Books, 2010).

Neville Buswell also left after ten years playing Ray Langton. Buswell had decided to quit acting and move abroad. Where the Langtons were concerned, Anne Kirkbride was told that Deirdre and Tracy were being written out with Ray, as writers felt there were enough young women in the cast. They changed their minds and decided to explore Deirdre's life as a single mother after Buswell pleaded for Kirkbride to keep her job. In November, Ray left the street for Holland, going alone to a country that had been supposed to a new start for the entire family following Ray's affair with waitress Janice Stubbs. Blanche Hunt was seen during Ray's departure episodes, her only appearances that year.

In one year, aside from losing his business partner, Len Fairclough lost his seat on the council for being drunk and disorderly, and nearly lost his business. The Kabin was also forced to undergo changes when Dawson's Cafe opened next door, and owner Joe Dawson shopped his rival to the council for not having customer toilets. The cafe - a permanent set addition - was run by Dawson for a while until Emily Bishop took over as manager. Meanwhile, the Kabin's cafe section was closed down and transformed into a record shop.

Viewers were introduced to factory loudmouth Ida Clough, who was a semi-regular for ten years appearing in factory-related stories, and, in the last episode of the year, young biker Brian Tilsley, the first sign of an increased role for Lynne Perrie's character Ivy Tilsley which would occur in 1979. Short visits were also made by Derek Wilton, Peter Barlow, again played by Joseph McKenna, and Billy Walker, the latter for a storyline in which Annie Walker risked losing the Rovers due to a takeover at Newton & Ridley which ultimately didn't happen. Both of Annie's children returned to her side for the first time since 1963, although Joan Davies was played by Dorothy White and not the original actress June Barry.

Once again, Coronation Street had no episode on Christmas Day even though it fell on a Monday.

Ratings fell from 1977 in all but the last four months of the year, with Spring ratings over two million viewers down on the previous year. The year as a whole averaged 15.01 million viewers, the second-lowest average of the decade after 1972 and an 870k fall from 1977. Three episodes reached twenty million viewers - two in January, following Ernie Bishop's murder, and another, Episode 1871 on 20th December, which had an audience of 20.44 million viewers and was the highest rated episode of the year.

Eight episodes reached the top of the weekly ratings chart, a drop from nine the year before. After the success of the first half of 1977, Coronation Street's ratings were almost back to 1972 levels.

Retrieved from "https://coronationstreet.fandom.com/wiki/Coronation_Street_in_1978?oldid=370766"
*Disclosure: Some of the links above are affiliate links, meaning, at no additional cost to you, Fandom will earn a commission if you click through and make a purchase. Community content is available under CC-BY-SA unless otherwise noted.