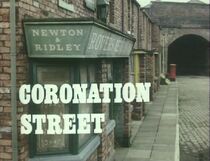 In the Hush-produced episodes, Blanche Hunt left Weatherfield for Kenilworth to manage Dave Smith's country club. Reginald Marsh reprised his character who was last seen in 1971, making his final appearance in the programme, while Maggie Jones was reduced to occasional appearances until she finally became a regular cast member again in 1998. Blanche's departure meant that the Corner Shop underwent a change of management for the third time in two years as teenagers Gail Potter and Tricia Hopkins were left to hold the fort.

Hush's replacement was one Bill Podmore, a Granada comedy producer whose experience on the soap was as a director. Podmore didn't want the job but, assigned to Coronation Street by David Plowright, he agreed to do a year and move on. He went on to become one of the programme's most celebrated producers, remaining in the job until he retired in 1989 (with a period as executive producer).

Upon watching recent episodes, Podmore observed that the programme's natural flair for comedy was all but gone, and instructed the writers to include more humour in scripts. Podmore sought out the areas "crying out for a facelift or even a face change" and began to put his stamp on the show. One-by-one, the households and workplaces in the programme were revitalised with new ingredients, with the focus being on redecoration rather than demolition. A high priority was the Corner Shop, as Podmore strongly disagreed with the decision to put Gail and Tricia there. He hired Madge Hindle, with whom he'd worked on Nearest and Dearest, to play Renee Bradshaw, befitting his belief that the shop - as a focal point of gossip - needed an older woman in charge. Renee's younger brother Terry had already been introduced, though the builder did not last the year and Renee carried on as a solitary character in the vein of Maggie Clegg. With the shop sold, Gordon Clegg didn't appear again until 1982.

Geoffrey Hughes was brought back full-time, with Eddie Yeats becoming a regular fixture at the Ogden household. This had the added benefit of cutting Bernard Youens's workload in consideration of the actor's growing health issues. In July, Eddie helped Hilda Ogden redecorate by supplying the wallpaper for her famous "muriel". At the Rovers, Fred Gee became the new potman, providing a balance to the sexes behind the bar and another target for Annie Walker to lord it over. Mavis Riley gained a new love interest in the form of sales rep Derek Wilton, filling the void left by Jerry Booth. Played by Peter Baldwin, Derek was not a full-time character and would appear when required by storylines.

A key addition to the setup was denim sweatshop Baldwin's Casuals, run by wily cockney Mike Baldwin. The factory opened in the defunct warehouse building in December and would maintain a greater presence in storylines than its predecessors on the site, heralding more regular appearances by machinists Ivy Tilsley and Vera Duckworth. Ernest Bishop was also employed there as a wages clerk when his Camera Shop went out of business, after a period on the dole.

Podmore's most salient casting was Patricia Phoenix as Elsie Howard. Podmore received a letter from Phoenix asking to come back just as he took over, and agreed on the proviso that it was on his terms. These primarily concerned Elsie's appearance, as Phoenix was famous for disregarding instructions regarding the character's wardrobe, hair and makeup. Alan Browning, then married to Phoenix, expressed interest in reprising the role of Alan Howard, but was turned down by Podmore with Elsie embarking on a trial separation from Alan when she returned to the street in April. Writers kept Elsie single and instead focused on her work running Sylvia's Separates clothing store with assistant Gail Potter, who was also her lodger at 11 Coronation Street. By the end of the year, Sylvia's had been taken over by Mike Baldwin and Elsie was installed as sewing room supervisor at the factory. Ken Barlow, the previous occupant of No.11, went to live with Albert Tatlock.

As one 1960 veteran returned, another left. Coming back from a three-month break, an increasingly ill Margot Bryant was finding it difficult to remember her lines to such an extent that her script had to be placed in front of her in the studio as she recorded her scenes. Minnie Caldwell was written out until further notice, and Bryant retired shortly thereafter, spending the rest of her life in a nursing home. In October, Minnie sent word to her friends in Coronation Street that she was remaining with Handel Gartside in Whaley Bridge.

The cast was expanded to accommodate the new arrivals, with only the only casualty being Kathy Jones. The actress found her character Tricia Hopkins written out after losing her job at the Corner Shop.

The programme's fifth title sequence made its debut with Episode 1596. The new sequence was a modification of the old one, with fewer shots and one significant addition: a cat, which became a staple from thereon in.

The highest-rated episode of the year was Episode 1589 (7th April 1976), the episode after Elsie Howard's surprise re-appearance at the end of the previous episode, which was seen in 8.8 million homes (translating to 16.83 million viewers). This was the highest audience for Coronation Street since 1970.

Despite Elsie's return which boosted figures for April and May, the average rating for the year was 15.39 million viewers, a drop of 70,000 viewers from 1975 and the third lowest of the decade. Seven months saw gains on 1975, scattered across the year with no major trends.

The programme's absence at the top of the viewing charts continued, with only one episode reaching number one.