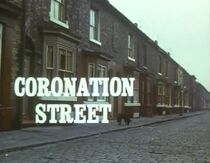 Eric Prytherch's uninterrupted two-year run as producer made 1973 the first in which the same person was in charge from beginning to end. Prytherch continued to innovate in his second year, introducing The Kabin to the programme and initiating the popular partnership of Rita Littlewood and Mavis Riley. Meanwhile, after stepping down as executive producer at the beginning of the year, H.V. Kershaw continued as a staff writer until his retirement in 1988.

The Kabin made its debut in June, providing the residents with a regular newsagent and cafe. Except for Snape's Cafe in 1961, an eatery had never been a staple of Coronation Street but it would be from this point on. The Kabin's owner Len Fairclough appointed Rita Littlewood manageress, as her singing career ran its course, with Mavis Riley as assistant. Thelma Barlow followed up her brief appearances as Mavis in 1971 and 1972 for a longer stint, carrying on until January 1974. Rita's brassiness, pitted against Mavis's dithering eccentricity, would form one of the programme's best-loved and most enduring double acts.

Another future mainstay returning as a main cast member was Anne Kirkbride. Her character Deirdre Hunt was slowly woven into Street life, becoming Ray Langton's girlfriend and secretary at the yard. Deirdre was first seen wearing her trademark large glasses upon her March return.

A notable first was the introduction of Weatherfield's twin town Charleville for an exchange visit by three men from the French suburb. This followed the entry of the UK into the European Economic Community (EEC) in January, a real-world event which was mentioned in the programme. Along similar lines, the introduction of VAT in the UK was reflected in a storyline in which Len, Ray and Jerry Booth refused to pay tax on a building job for which they were yet to be compensated, causing them to be taken to court.

September featured a clash between Annie Walker and Vera Hopkins, mother of 16-year-old schoolgirl Tricia who had been illegally served alcohol at the Rovers. Actresses Kathy Staff and Kathy Jones were regular guest artists in the programme and the characters were revived the following year when the rest of the Hopkins family was created to replace Maggie Clegg in the Corner Shop.

In the same month, Judith Barker made a return as Janet Reid. Janet became the latest in a long line of girlfriends for Ken Barlow. One such girlfriend, appearing earlier in 1973, was Elaine Perkins played by Joanna Lumley in a memorable guest turn. Janet was thrust into a central role in October when she and Ken returned from Scotland as a married couple, which was presented as a surprise to viewers. Peter and Susan Barlow were seen for the first time since 1971, with Susan again played by Wendy Jane Walker and Peter recast with Linus Roache, the fourth actor in the role and son of William Roache.

In a sign of the long-running nature of the programme, Doris Speed became the first actor to hit 1,000 appearances. Patricia Phoenix and Peter Adamson followed later in the year.

Coronation Street went on location in London for the first time when Elsie Howard made a secret visit to the capital to see Dennis Tanner in Pentonville Prison after he was locked up for running a double glazing scam. The Dennis scenes took place off-screen, with no appearance by Philip Lowrie. In the filmed scenes, Elsie was knocked down by a taxi and rushed to hospital, while back in Weatherfield Alan reported his wife as a missing person.

Not long after this storyline, Elsie accepted a job setting up a new warehouse in Newcastle. This led into what was planned as a short absence by Patricia Phoenix while she toured on stage with Subway in the Sky, and as such there was little fanfare surrounding the event. While on holiday, Phoenix announced that she was quitting the series, claiming to be bored with her role. Alan Browning also quit the role of Alan Howard, though as his contract didn't line up with Phoenix's, he continued to appear in her absence. His last scenes aired in January 1974 in which Alan returned to Weatherfield to tie up the Howards' affairs.

Meanwhile, Diana Davies's 18-month run as Norma Ford came to abrupt end in December when an off-screen Norma was said to be nursing her sick father Jacko, and Kenneth Farrington took another six-month break from playing Billy Walker in the latter half of the year.

Episode 1331, shown on 17th October, was viewed in 8,250,000 homes (corresponding to 18.15 million viewers) and was the highest rated episode of the year. The yearly average was 15.22 million viewers, a rise of 400,000 viewers on the decade-low in 1972. Seven months rose year-on-year, with increases of nearly two million viewers in July and August, and all but one of the drops were under a million viewers.

This bounce from the 1972 low was also reflected in the programme's chart positions, with seven episodes reaching number one. For the rest of the decade, Coronation Street would chart similarly, with no year seeing more than a dozen episodes reach number one until 1980.

Retrieved from "https://coronationstreet.fandom.com/wiki/Coronation_Street_in_1973?oldid=367348"
*Disclosure: Some of the links above are affiliate links, meaning, at no additional cost to you, Fandom will earn a commission if you click through and make a purchase. Community content is available under CC-BY-SA unless otherwise noted.