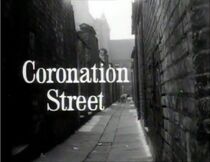 Two of Coronation Street 's former directors served terms as producer - Richard Everitt between episodes 428 and 435, and Howard Baker between episodes 458 and 469, 472 and 481, and again after 494. All other episodes were produced by H.V. Kershaw, the programme's former script editor and now prolific writer. This marked the beginning of a trend in which short-term producers alternated with Kershaw, a pattern which continued until 1971, giving the series a greater consistency in its tone and story patterns. Kershaw was also credited as executive producer between episodes 482 and 493.

Since the previous summer, Coronation Street had been running with a reduced cast. It was still Granada's most-watched programme, but faced severe budgetary restrictions, particularly with new cast signings. Going into 1965, there were 18 full-time cast members, with two more originals departing in the course of the year. A year after Tim Aspinall's purge, two houses in Coronation Street were still empty, and so writers decided to rid themselves of No.7 by having a faulty beam cause the front of the house to collapse. This had the added benefit of splitting the street down the middle, making it easier to erect in studio.

Betty Alberge was the last to leave as a result of Aspinall's purge. She departed the programme in June, when her character Florrie Lindley emigrated to Canada with her husband Norman. The storyline retconned Florrie's backstory, making her a married woman estranged from Norman rather than the widow she had always presented herself as. Edward Evans joined the cast as ex-sergeant major Lionel Petty, the Corner Shop's new owner. Lionel's daughter Sandra had already appeared in 1964 when she set her cap at Dennis Tanner, and her storylines continued in a comedic vein until Heather Moore left the series at the end of her six-month contract in December. Charlie Moffitt, former comic turned insurance agent, left the programme that same month.

Arthur Lowe's character Leonard Swindley had a low-key exit in May. Swindley's appearance, coming two months after Lowe had departed as a full-time cast member, was fleeting as the lay preacher said goodbye to the street's residents before leaving for pastures new. Two days later, on 2nd June, viewers found out where Swindley was going when Granada's new sitcom Pardon the Expression premiered, the first Coronation Street spin-off. Pardon depicted the comedic exploits of Mr. Swindley in his new role as assistant manager of department store Dobson and Hawks. Produced by H.V. Kershaw, it ran for two seasons and co-starred Betty Driver, Joe Stewart and Robert Dorning, witih many familiar faces from Coronation Street both behind and in front of the cameras.

Meanwhile, Graham Haberfield returned as Jerry Booth in February after a break of nine months, Jerry's marriage to Myra having broken down off-screen, and in April Alan Rothwell made a full-time return as David Barlow. The Barlows were re-established as the central family in the programme with the birth of Ken and Val's twins Susan and Peter, played by an uncredited Katie and Robert Heanue, and David marrying Irma Ogden and retiring from football due to a leg injury. Due to the difficulty of recording scenes with the twins, their appearances were kept to a minimum and were often recorded separately and inserted into the finished episode.

Another notable cast change was the temporary departure of Ena Sharples, who was absent for three months between Episode 473 and Episode 502 when Violet Carson took a sabbatical.

Coronation Street experienced its first drop year-on-year, averaging 17.95 million viewers, losing 400,000 viewers on its all-time 1964 peak. It was also the first year in which no episode achieved the programme's highest audience to date. The main reason for the drop was that for the first time since the programme began the BBC made a concerted attack on its popularity by scheduling the fourth season of their successful sitcom Steptoe and Son directly opposite the Monday edition of the Street between October and November. As a result, six Monday episodes failed to make the top twenty, the worst showing for the Street since early 1961.

June experienced a small drop year-on-year, with October to December falling by 2.5 million (December) to 5 million viewers. All other months were up on 1964, with July and September experiencing the largest gains.

For the second year after 1962, more episodes of Coronation Street reached number one in the charts than there were weeks in the year due to several episodes tying for first place. 56 episodes reached the top, with Episode 429 on 20th January gaining the largest audience of the year on 9.66 million homes (or 21.25 million viewers). The main storyline featured in that episode was Elsie Tanner and Ena Sharples's battle over 11 Coronation Street; Elsie's home which was recently left to Ena in a will.