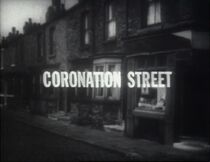 "There was life before "Coronation Street", but it didn't add up to much." - Russell Harty

In 1960, Granada Television staff writer and former child actor Tony Warren asked producer Harry Elton in desperation to be taken off his scripting duties for their series of adaptations of the Biggles adventure stories by W.E. Johns, a task he loathed. Part of Warren's dislike of the series was that he knew little about the world in which the books were set and Elton enquired what Warren did know enough about which would make a good series. Warren gave two answers: showbusiness and the North of England. This latter interest stemmed from childhood memories of his grandmother's neighbourhood in inner Salford. While working at BBC Leeds in 1958 Warren had submitted a script entitled Our Street to his bosses, which was adapted from his unmade 1956 script Where No Birds Sing. The setting of both was a northern backstreet similar to the ones he remembered. The BBC never replied to Warren's pitch, but Elton liked his idea and gave Warren just one day to come up with an idea that would "take Britain by storm".

Rather than begin work on a new script, Warren adapted Our Street for Granada under the title Florizel Street, set in a terraced street in Manchester. The script would eventually become the first episode of Coronation Street. To accompany the script, Warren wrote a memo for the Granada board, explaining the series:

"A fascinating freemasonary, a volume of unwritten rules. These are the driving forces behind life in a working class street in the north of England. The purpose of Florizel Street is to examine a community of this nature and, in doing so, entertain".

On 25th August Granada, with some reluctance, commissioned a 12-part series written by Warren, with Stuart "Harry" Latham as producer, H.V. Kershaw as script editor and Elton as its uncredited executive producer. They retained the option of a final thirteenth episode in which Florizel Street would be bulldozed, to resolve the series should it be unsuccessful.

Florizel Street was intended to be shown in the 7.00pm slots on Wednesday and Friday evenings which Biggles occupied until 12th October and which was then filled by two new eight-part serials by Granada: The Odd Man on Wednesdays, and an adaptation of H. G. Wells' Kipps on Fridays which was directed by Stuart Latham.

Before it went into production, the title was changed to Coronation Street, after Agnes the tea lady remarked that "Florizel" sounded like a brand of disinfectant (although Kershaw states that Cecil Bernstein, one of Granada's founders, ordered the change). As the titular street would have been built around the turn of the century, "Coronation" and "Jubilee" were shortlisted as possible names, referencing the 1902 coronation of King Edward VII and the 1897 Diamond Jubilee of Queen Victoria respectively. The final choice was made by Latham, Elton and Kershaw in an alcohol-filled evening in Latham's office.

Tony Warren had written about a cobbled backstreet consisting of seven terraced houses, with the Rovers Return public house at one end and a Corner Shop (initially an off-licence) at the other, providing the residents with places to meet and gossip. Most of the main characters were present in early drafts of scripts - Rovers landlords Annie and Jack Walker, Frank and Ida Barlow, their student son Kenneth (who at that point had a sister called Enid), Glad Tidings Mission Hall caretaker and battleaxe Ena Sharples, bus driver Harry Hewitt and his daughter Lucille (then named Janice), shop owner Florrie Lindley, and the "common" Tanners: Elsie and her grown up children Dennis and Linda. Albert Tatlock was added to the line-up when a Granada executive asked for someone of "age, charm and dignity".

The street began its life in Studio 2 at Granada's Quay Street studios in Manchester. In the programme's first year, it adhered to an edict sent from Granada bosses not to construct the street itself in studio, except for exterior shots of individual houses. Instead, Tony Warren and set designer Denis Parkin visited the backstreets of Salford, ending up in Archie Street in Ordsall which was filmed for the programme's title sequence and end credit photocaptions. Archie Street had no pub and nine houses - two more than Florizel Street - but the differences were disguised with careful camerawork.

The show's theme music, a cornet piece, accompanied by a brass band plus clarinet and double bass, reminiscent of northern band music, was written by Eric Spear, who was paid £6 for its use. Ronnie Hunt played the trumpet on the original recording of the theme. Spear was given the choice of either a royalty payment for each use of the theme on television, or a one-off payment at the time of recording, opting for the latter.

Casting and design preparation took place over September and October. Coronation Street went before the cameras for the first time between 7.30pm and 8.00pm on Friday 18th November when the first of two pilot episodes (known as "dry runs" within Granada) was recorded in Studio 2. Patricia Phoenix, Anne Cunningham, Frank Pemberton, William Roache, Betty Alberge and Christine Hargreaves had been cast by this stage as, respectively, Elsie Tanner, Linda Cheveski, Frank Barlow, Kenneth Barlow, Florrie Lindley and Christine Hardman. The characters of Dennis Tanner, Ida Barlow, Albert Tatlock and Ena Sharples appeared in the dry run but were subsequently recast. The other pilot shot combined elements of what would become episodes 3 and 4, and featured the characters of Minnie Caldwell and Martha Longhurst (although not played by Margot Bryant and Lynne Carol).

The finished products were shown to Granada's weekly Programme Committee, which included the network's founders Sidney and Cecil Bernstein, future Managing Director Denis Forman and others. The committee unanimously panned the programme, expressing doubts about using the local dialect in a drama, putting out a soap opera in primetime, and giving a negative impression of the north to the rest of the country. As no alternative would be ready in time, Coronation Street went ahead with its scheduled live transmission date of Friday 9th December but Elton was ordered to find a replacement as soon as possible.

News of the committee's verdict soon spread to the production team, leading Harry Elton to perform an act of showmanship meant to prove their programme's viability. On monitors placed around the Granada building, a lunchtime screening of the dry run took place for all staff, who then filled in questionnaires giving their views on what they had seen. Although praise was not unanimous, many responded favourably to the characters and their everyday problems. The positive feedback helped the cast and crew prepare for transmission with a renewed confidence.

Further casting took place prior to 5th December, when rehearsals began on the transmitted version of Episode 1. Jack Howarth, Margot Bryant, Lynne Carol, Noel Dyson and Philip Lowrie replaced actors from the dry runs, in addition to Alan Rothwell playing the newly created David Barlow, Arthur Leslie as Jack Walker, and Ivan Beavis and Jennifer Moss as Harry Hewitt and his eleven-year-old daughter Lucille, the youngest member of the cast. Although Warren's preference was for Lancastrians to play anyone from Weatherfield, London-born Daphne Oxenford was cast as Esther Hayes, while Ernst Walder and Doreen Keogh played Ivan Cheveski and Concepta Riley, respectively Linda's husband and Rovers barmaid who were the only non-British characters. Arthur Lowe, playing draper and lay preacher Leonard Swindley, was one of the last actors cast.

The last remaining part to be cast was Ena Sharples. After the first dry run, actress Nita Valerie was deemed unsuitable and replaced with Nan Marriott-Watson, who subsequently turned the role down. As rehearsals were due to begin, Granada ordered that the character be excised from the script. Tony Warren then suggested Violet Carson for the part. Carson auditioned and was hired, completing the cast.

The first episode was broadcast live at 7.00pm on Friday, 9th December in all but two of the ITV regions; Tyne Tees Television showed an episode of Highway Patrol while ATV's offering was an instalment of Wyatt Earp. The competition from the BBC was an edition of their evening magazine programme Tonight. In Manchester, the next episode of Coronation Street was recorded a quarter of an hour after the live first episode ended for broadcast the following Wednesday. This twice-weekly broadcasting pattern continued until March 1961. The 'live' aspect of the recording meant that each scene would be set up in advance with the cameras at the centre so that one scene could follow the last with no delay. Actors would wait in position for their scene to begin.

All twenty-one characters were introduced by Episode 5 and May Hardman became the first character to die in Episode 7, the last episode of the year. With strong ratings, the programme's run was extended.

The series was introduced by a one-page article in the TV Times which mainly featured on Tony Warren but described the Street as "four miles from Manchester in any direction" and "it is home to the 20 people who live there, and most of them would not like to change their worn surroundings for something new but less humanised." (It should also be noted that the same article described Ena Sharples as a "kindly ex-barmaid"!)

Coronation Street caught on with viewers very quickly. The use of northern English language and dialect was rare on British television drama, but although viewers identified with the "ordinary people" characters, the press did not take to the show, with the focus on everyday troubles of the working class being deemed uninteresting. Some complained that the accents were difficult to understand. After the second episode was shown, Ken Irwin of the Daily Mirror famously said:

"Young scriptwriter Tony Warren claims to have spent a couple of months going around meeting ‘the ordinary people’ of the North before he wrote the first episode of Granada’s serial Coronation Street. Frankly, I can’t believe it. If he did, he certainly spent his time with the wrong folk. For there is little reality in his new serial which, apparently, we will have to suffer twice a week. The programme is doomed from the outset - with its dreary signature tune and grim scene of a row of terraced houses and smoking chimneys."

However Mary Crozier in The Guardian of 10th December said the programme...

"promises to introduce a view of Northern life which will probably prove extremely popular... "Coronation Street" with all its cliches has something funny and forthright about it... Mr Warren has pinpointed phrase and accent, humour and oddity, and if can keep the mixture sharp and not put in too much treacle it should cook up very well."

One week later, she said that the programme was:

"...getting into its homely stride and the Lancashire backchat hits the authentic note."