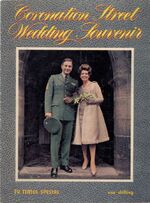 The Coronation Street Wedding Souvenir was a special magazine published on Saturday 7th September 1967 to tie-in with the just-broadcast episodes featuring the wedding of Elsie and Steve Tanner. It was the first magazine or booklet ever printed about the programme and, except for records and a set of jigsaw puzzles in the early 1960s, one of the first pieces of merchandise associated with the programme.

The thirty-two page magazine was, for the most part, pictorial in content with photographs of the wedding and reception afterwards. These were not taken on the set of Episodes 701 or 702 as recording was too close to transmission of the instalments and did not give TV Times enough time for preparation or printing of the colour photographs. The main cast who would feature in the two episodes were instead assembled at St. Margaret’s Church in Whalley Range, Manchester whose external stone archway resembled the one designed as the church exterior in the studio. The location used for the photographs of the wedding reception was not the same as seen in the episodes and it was named in the magazine, but not on-screen, as the Boar's Head, Newton-cum-Wells (a fictional place). Anne Cunningham and Ernst Walder had to return to Manchester some time prior to the rehearsals and recording of the episodes to appear in the photographs but missing from the magazine were Jean Alexander, Margot Bryant, Doris Speed, Arthur Leslie, Ivan Beavis and Doreen Keogh who all appeared on screen. Some of the photographs used for the magazine have since appeared in print elsewhere as official publicity pictures, such as on the cover of the 1967 Network DVD. The back cover featured a photograph of the Tanners at Manchester Airport, supposedly about to board a plane for the honeymoon flight to Lisbon.

Dennis Tanner’s speech (not heard on screen) was printed along with his supposed hand-written amendments. The telegrams were the same as read out in the episode by Dennis and Gregg Flint although the episode featured several additional ones (such as one from an ill Irma Ogden and the girls at Miami Modes.)

The rear pages of the magazine featured articles on the Tanners' new home in Altrincham, Elsie’s trousseau and pictures of previous weddings in the programme.

Priced at one shilling, the magazine was devised by Derek Meakin and photographs were taken by Peter Bolton and Harry & Warwick Bedford. In its issue of 23rd to 29th September, TV Times reported that the magazine had gone into a second printing and altogether 650,000 copies had been sold but sources since then quote a figure of over one million copies.