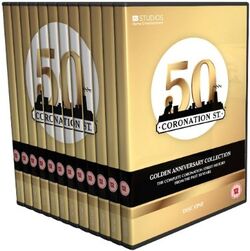 The twelve-disc boxset was released on 11th October 2010.

From the back of the DVD box:

This very special Box Set includes the following programmes:
The Stars of the Street: 50 Classic Characters, the very first episodes, 31 key and ground-breaking episodes featuring familiar faces young and old, including the most memorable episode where Prince Charles was on set, 6 Coronation Street Family Albums, Corrie Controversies, 8 specials focusing on events central to the past 50 years and The Street Undressed - a look behind the scenes.

The boxset contains twelve individual DVD cases, each containing one disc. The episodes do NOT include the original Granada idents and advert bumpers. There are subtitles provided.

A countdown from 50 - 26 of the best characters on the street.

A countdown from 25 - 1 of the best characters on the street.