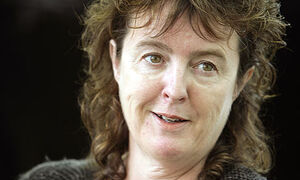 Dame Carol Ann Duffy (born 23rd December 1955) is a Scottish poet and playwright who was appointed as Britain's Poet Laureate in May 2009.

She was born in Glasgow, the daughter of an electrical fitter and moved to Stafford when she was six years old. She attended Catholic schools in the area where her literary talent was noted by teachers and she began to have her poetry published when she was fifteen. She attended Liverpool University from 1974 studying philosophy and had two plays performed at the Liverpool Playhouse. She graduated in 1977 and worked as the poetry critic for The Guardian from 1988 to 1989, and was editor of the poetry magazine Ambit. In 1996, she was appointed as a lecturer in poetry at Manchester University, and later became creative director of its Writing School.

She was appointed as Poet Laureate on 1st May 2009. Formal poems she has written to make state events include Rings for the 2011 wedding of Prince William and Catherine Middleton, The Throne, which she composed for the Diamond Jubilee and Richard for the re-internment of Richard III at Leicester Cathedral in March 2015.

A good friend of Coronation Street creator Tony Warren, the producers asked her to compose a poem to be read out in the programme to mark its 50th anniversary. She happily accepted, saying "I was so proud to be asked and so proud to know my poem would be on the show." The poem was read out by William Roache in character as Ken Barlow in Episode 7497 (24th December 2010) as the residents gathered for an outdoor carol service and Duffy was present during filming, saying afterwards it was "magical". "We were stood in the fake snow and it felt like a real street," she said, adding "If there was anyone deciding what poem was to be read at a community event it would be Ken."

If someone could direct me to a street where I could stand
Cobbles beneath my feet tearful with rain;
The shadows of my hopes behind the stained-glass windows of a pub, ghosts –
I would turn up the collar of my coat, walk, number each small, terraced house by heart:
Birthplace; neighbours – hardman, hussy, haridan, hustler, hero, heroine –
Threshold, bride and groom as clueless of next year as Christmas Eve;
Or exit-place, a hearse, a raw and local grief...
Then I'd retrace my steps, perhaps a baby's cry sharp as a sudden star nailed to the sky,
To stand now in this backstreet bar, nursing a beer
All my griefs, my gifts, and glad I live here.

Retrieved from "https://coronationstreet.fandom.com/wiki/Carol_Ann_Duffy?oldid=232168"
*Disclosure: Some of the links above are affiliate links, meaning, at no additional cost to you, Fandom will earn a commission if you click through and make a purchase. Community content is available under CC-BY-SA unless otherwise noted.