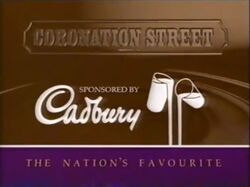 Cadbury was the first sponsor of Coronation Street beginning with Episode 4062 (6th September 1996) capping a deal that had been announced six months prevously.[1] The original sponsorship had a computer generated chocolate-like version of the street (a mock up of which can be seen in place at the Cadbury World museum in Bournville, Birmingham) with chocolate characters resembling some generic Coronation Street characters.

In the summer of 2006, Cadbury Trebor Bassetts had to recall over one million chocolate bars, due to suspected salmonella contamination, and Coronation Street stopped the sponsorship between Episode 6321 (22nd June 2006) and Episode 6371 (3rd September 2006).

In late 2006, Cadbury did not renew their contract, but agreed to sponsor the show until Coronation Street found a new sponsor [2].

Retrieved from "https://coronationstreet.fandom.com/wiki/Cadbury?oldid=373975"
*Disclosure: Some of the links above are affiliate links, meaning, at no additional cost to you, Fandom will earn a commission if you click through and make a purchase. Community content is available under CC-BY-SA unless otherwise noted.