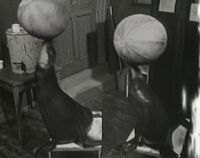 Bunny and Sherry were two performing sea lions who belonged to the variety act Captain Johnson and his Troupe and who were all booked by Dennis Tanner to appear at a charity concert for the Over 60's Club‏‎ held in the Glad Tidings Mission Hall in March 1962. Unfortunately, the van bringing the troupe broke down on the road from Huddersfield but Captain Johnson was able to send the two sea lions on. With another act, The Blue Streak Rockets, having been banned for reasons of morality, Dennis found himself having to cancel the concert and look after Bunny and Sherry for the night - and keep them in water. Realising that Jack and Annie Walker were away from the Rovers for the night at a do in Manchester, Dennis got the key to the pub from Concepta Hewitt by telling her a lie and installed the animals in the bathroom. However the Walkers returned early as the Royal Hotel had not reserved their own room. Annie thought she heard a barking sound but dismissed it and then, questioning her own sanity, found the two sea lions happily playing in her water-filled bath.

The two sea lions appeared in Episode 129 (7th March 1962) which was made towards the end of the Equity actors' strike and which banned guest actors from appearing in the programme but which did not prevent animals or animal acts. Consequently Rupert the monkey appeared in November 1961 and several storylines were constructed around Harry Hewitt's racing greyhound Lucky Lolita in the first months of 1962.

Retrieved from "https://coronationstreet.fandom.com/wiki/Bunny_and_Sherry?oldid=273995"
*Disclosure: Some of the links above are affiliate links, meaning, at no additional cost to you, Fandom will earn a commission if you click through and make a purchase. Community content is available under CC-BY-SA unless otherwise noted.