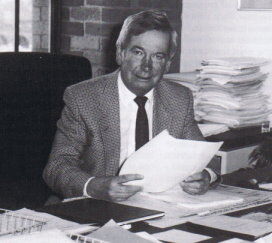 Bill maintained a consistent element of comedy during his stints as producer, which enabled characters such as Stan Ogden, Hilda Ogden and Eddie Yeats to become popular and well-loved by longtime fans to this day. However, some of the cast nicknamed him "The Godfather" because of his occasional ruthlessness when it came to killing off characters such as Ernie Bishop and Renee Roberts. He also became somewhat unpopular with his co-workers for terminating the contract of Peter Adamson (Len Fairclough) after Peter had sold his story of his 1982 arrest for child molestation to a tabloid newspaper. However, Podmore stood by Peter Dudley (Bert Tilsley) when Dudley was charged with importuning twice in the 1980s. Dudley claimed that the second time he was charged, he was set up by police, and Podmore wrote Bert out (with the intention of bringing him back in) when Bert had a retrial in 1983 after the jury failed to reach a verdict on the second count. Unfortunately, Dudley passed away after suffering two heart attacks and a stroke.

Bill was born in Gainsborough in Lincolnshire and joined the BBC in December 1954 working at their Lime Grove studios in West London, with Sooty being the first show he worked on. One of his next credits was the first series of Dixon of Dock Green in 1955 but his first job as a cameraman was on Eric Robinson's Music for You. Soon afterwards he moved to ATV in their Birmingham studios and then joined Granada Television in September 1957 as a senior cameraman based in their London Chelsea studio, on one occasion working as a cameraman in the Manchester Quay Street studios on Coronation Street in 1961, confessing that he and his colleagues hadn't seen the programme up to that point as they had been working on other productions. He moved to permanently to Manchester in 1965 and became a director in 1967, and then a producer on Nearest and Dearest in 1970.