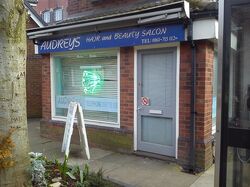 Audrey's (previously Alma's) was a hair salon located at number 2 Coronation Street which was opened by Audrey Roberts in 1998. She ran the business successfully until 2018 when her shares were bought by Maria Connor and Claudia Colby. In 2020 the salon closed after Ray Crosby bought up the shares in an attempt to redevelop the street. Debbie Webster later blackmailed Ray into signing all his businesses over to her and rented the premises out for Alina Pop to open a pop-up nail salon.

"Alma's" reverted to "Audrey's" in April 2003 following the death of Alma's 'cousin' and Gail's husband, Richard Hillman who was responsible for the death of Maxine Peacock (among others) and tried to kill Audrey and her family. Other staff throughout the years have included Maria Sutherland, Natasha Blakeman, and Audrey's grandchildren Sarah and David Platt.

In April 2008, Audrey's was one of the places David caused damage to on his street-wide rampage, along with a few car windows, some house windows, and the kebab shop. He smashed the front window with the lead pipe he had been using to smash other windows beforehand. David was later arrested as Rita Sullivan emerged from the salon mid-hair do, annoyed that the street's residents now knew that she wasn't a natural redhead.

Edna Hargreaves died at the salon while under the drier in March 2011. In August 2011 Audrey took the day off. Having David and Kylie watch the salon turned out to be a disaster as Kylie told Betty they "don't do OAPs on Monday".

In March 2012, Audrey suffered a heart attack in the salon as her family had erupted into arguing inside the building. She survived. Audrey's would certainly not be out of the spotlight of drama throughout 2015. Maria departed over the Summer to look after her ill mother in Cyprus, leaving the salon one staff member short.

They needn't worry, however, as new arrival Nessa Warner quickly filled the position, despite the fact that she and Audrey did not get along.

Further trouble came along in September 2015 when vicious Callum Logan, who was terrorising Audrey's family, set two of his thugs on the salon and robbed the place, trashing it and leaving Audrey traumatised.

In January 2016, stress at the salon triggered another heart attack for poor Audrey, who was thankfully discovered by Ken Barlow when he saw that the salon's front door was ajar.

Callum's friend Gemma showed up at the salon demanding a job in March 2016. David hired her with permission from Audrey, but fired her after one day, as he had never planned on keeping her on. She later went to work at the Prima Doner kebab shop on Victoria Street.