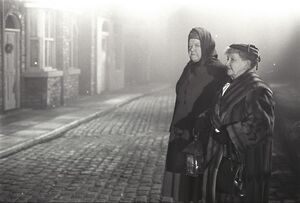 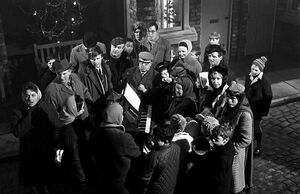 Emily has organised an outdoors Carol concert for the residents of Coronation Street. Ena and Minnie approach Albert's house and are late as Minnie was digging out an old lamp to bring with her. They and Emily knock on Albert's door but he refuses to join them as its too cold and they have no musical accompaniment for him. He's told he's wrong as Stan and Ken are among the menfolk heaving Ena's harmonium out of her flat. Emily gets Len and Elsie to join them as all of the other residents gather together in the middle of the street with a handful of children. Ena decides on Silent Night for their initial Carol. Their first attempt is drowned out by a passing train on the viaduct and their second attempt is drowned out when a Salvation Army brass band approaches and plays Hark The Herald Angels Sing far more loudly than the carollers can hope to compete with. Ena goes off to speak to them and comes to an agreement - the band will play and the residents will sing along. She wishes everyone a Merry Christmas and asks them to pray for peace all over the earth - at least "them of us that knows how". The residents happily sing Silent Night along with the band. 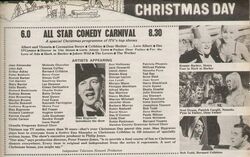 1970
Add a photo to this gallery
Retrieved from "https://coronationstreet.fandom.com/wiki/All_Star_Comedy_Carnival?oldid=357711"
*Disclosure: Some of the links above are affiliate links, meaning, at no additional cost to you, Fandom will earn a commission if you click through and make a purchase. Community content is available under CC-BY-SA unless otherwise noted.