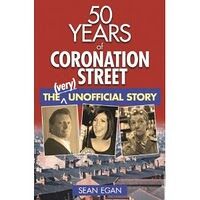 50 Years of Coronation Street: The (very) Unofficial Story is a book published independently of ITV to celebrate the programme’s fiftieth anniversary in 2010. Textual in its nature, rather than the “coffee-table” type format, the 314-pages chart the development of the programme from its commissioning in 1960 through to the present day using analysis of the storylines, contemporary viewer reception through viewing figures, critical reactions and interviews with many of the individuals associated with the programme, most of them “behind the scenes” staff with some of them giving their first published interviews on the subject of the programme. Extremely accurate in its detail (e.g. the book is the first one ever to state correctly the date of the first colour transmission - 17th November 1969), the book is divided into seven parts: the programme’s birth, its five complete individual decades and the show in the present day.

Its author, Sean Egan, is both a music journalist and fiction writer who has been a firm viewer of the programme, both intermittently in his childhood in the 1970s, and regularly since the 1980s. A fan of the late 1980s and early 1990s in particular, when David Liddiment’s changes in his role as executive producer modernised the programme’s production and narrative pace, Sean chose then to write the book not specifically to tie in with the fiftieth anniversary but, “having written about most of my favourite recording artists, it was logical to write about my favourite television programme.” Wary of beginning a piece of work without a commission, he realised that a selling point for something that would have limited appeal geographically (i.e. no US publication) was the upcoming half-century celebration which was mentioned by Katherine Kelly on her appearance on The Justin Lee Collins Show on 2nd April 2009 and wrote a one-page synopsis which appealed to JR publications of London who green-lit the project.

ITV initially provided help and assistance by setting up an interview with William Roache before stepping in and pointing out that publication would clash with their own intended “official” work, Fifty Years of Coronation Street by Tim Randall. Sean was then constricted by having to speak with people who were no longer ITV employees but also gained an advantage in that he was able to talk to people no longer under contract and therefore under no obligation to toe the usual corporate line. Whilst avoiding “tabloid” salacious content, it did mean that a thoroughly honest appraisal of people and events in the programme’s past was possible.

Within the team of writers, important and prolific figures such as John Finch, Adele Rose, Tom Elliott and John Stevenson, who between them contributed well over one thousand episodes, gave great insight into the behind-the-scenes machinations that led to the transmitted programmes over all of its decades, while Daran Little’s previous occupation as official programme archivist meant that a thorough understanding of the overall development of the programme, both on and off screen was possible. The passage of time means that many important figures who directed and produced the programme have passed on but Sean was able to see and listen to the memories of Derek Granger, Michael Cox, David Liddiment, Brian Park and Carolyn Reynolds. Those who appeared in front of the cameras and agreed to be interviewed for the book were Alan Rothwell, Ernst Walder, Bill Kenwright and Geoff Hinsliff while a final eclectic group included theme tune musician David Browning, Granada Managing Director Sir Denis Forman, journalist Ken Irwin and legendary writer Stan Barstow who was invited to write for the programme in the early 1960s and acted as an uncredited consultant on the writing team at the end of the same decade.

Many points of reference were used for research on the book including Daran Little’s invaluable works The Coronation Street Story and 40 Years of Coronation Street, as well as many pieces of data contained in this website which is specifically mentioned within the narrative as well as in the acknowledgements at the back.

The book was published in hardback on 25th September 2010 with an unrevised paperback edition coming out on 28th August 2013.