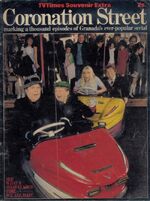 Coronation Street, a TV Times special to mark the programme’s one-thousandth episode, was a sixty-four page magazine published in July 1970 at the price of two shillings (ten pence) in time for the broadcast of what was publicised as the noteworthy episode on 19th August (but which was in reality Episode 999).

The magazine, unlike its 1980 counterpart Coronation Street 2000, contained no episode guide but instead had an eclectic series of articles and viewpoints about the then ten-year success of the programme. Central to the magazine were several pages of photographs of the cast in their character’s costumes on a supposed day trip to the since-demolished Belle Vue Zoo and Pleasure Gardens in East Manchester. Five TV Times photographers accompanied the cast, among whom was Arthur Leslie in one of his last public appearances for the programme before his unexpected death on 30th June - indeed, reference was made within the introductory article to that recent, sad event.

Other pages included an article by John Braine, author of the seminal 1950s novel Room at the Top, in which he gave his take on the success of the programme and concluded with the idea that there should be a Sunday afternoon omnibus of the previous week’s episodes (an idea that eventually bore fruit in 1989); a six-page photospread of “magic moments”, a feature on producer June Howson; a recap of northern artist John Bratby’s infamous 1966 painting of the cast; a “who’s who” of the main characters in which the photographs featured were of the cast when they were younger and, in some cases, babies; “tragic moments” which covered the deaths and disasters featured in the programme in its first ten years, “Where are they now?” which brought viewers up to date with the careers of former cast members, features of who lived in which houses and a view of how Coronation Street might look ten years hence in which original designer Denis Parkin provided an illustration which showed raised flower beds with ornamental trees, porches on the front on numbers 9 and 11, a boutique in the arches of the viaduct and a confident prediction that by 1980 the Corner Shop would be a mini-supermarket and the Rovers would serve meals cooked with a microwave – both of which came true eventually but took slightly longer than ten years to reach fruition.